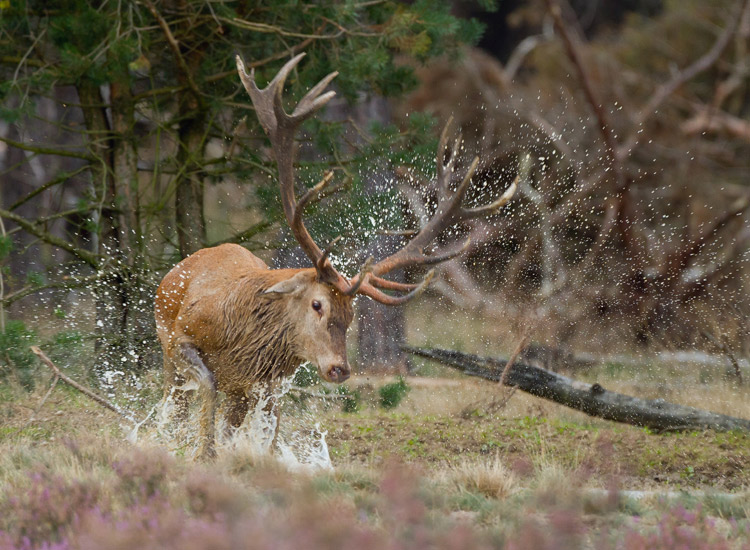 Red deer are Britain's largest native land mammal resident since the last ice age about 10,000 years ago. Herds of red deer are frequently seen in the upland areas of Highland Perthshire, although originally this creature was a woodland dweller living in the vast Caledonian forests that once covered much of Scotland. Red deer no longer have any natural predators due to the extinction of the wolf and lynx, therefore numbers are higher than ever before, approximately over 400,000 red deer are roaming wild in Scotland. Heather, grass, mosses, lichens and berries are the mainstay of their diet but they are also partial to tree seedlings and the bark of trees, thus creating a challenge for foresters!

Antlers from the stags fall off each year in spring but a new pair grow in quickly, which have a furry coating called 'velvet' that peels off when the antlers stop growing. During the summer months deer live in the high open mountain areas to escape the worst of the biting insects, favouring areas that are cut by deep peat hags, in which to roll around to give relief from insect irritation. June is the calving time and the hinds tend to choose lonely corries for the birth.

Calves can stand within ½ hour of being born but for the first few days are left hidden in the grass, camouflaged by their spotted coats. Autumn brings the wonderous sound of roaring stags to many Highland Perthshire hills and glens as the rut gets into full swing. Testosterone fuelled stags are at their heaviest at this time of year and the roaring helps to establish seniority within the herd. When two stags are evenly matched a fight ensues, the winner securing the largest harem of hinds. As winter sets in and the weather worsens herds move down to lower ground in search of food.

When watching these marvelous mammals we would suggest using binoculars as deer are naturally shy and blend in well with the colours of the landscape. During the summer when weather is good you can see them on the open hills, during the day they feed and rest on higher sunny slopes, then at night the herd will move to lower, more sheltered ground.

Roe deer are the most widely spread native deer species in Higland Perthshire, they are much smaller than red deer and favour woodlands where they survive on herbs, buds, leaves and twigs. Pitlochry and Dunkeld have excellent way-marked walks networks where roe deer can often be seen darting through the woods or nibbling in the clearings. Woodland edges throughout Highland Perthshire are favourite haunts for this striking wild animal. Roe deer are less socialable than red deer, mostly sighted alone or in small group of 2 or 3.

The roe deer's rutting season takes place during July and August. Their mating ritual involves the bucks (male) chasing the doe (female) around trees, known as roe deer rings. The buck's antlers normally have 6 very sharp points and they too cast their antlers each year and grow new ones.

Winter can often be a good time of year for seeing roe deer, favouring low level woodland, they tend to be more active at first light and as darkness starts to fall. Roe deer enjoy the warmth and can often be seen sunbathing in the sunlit woodland clearings. In late summer male bucks can be heard barking, this is part of a ritual to claim their territory.

Deer are often seen alongside the A9 trunk road (especially just North of the Jubilee Bridge at Dunkeld & around the Blair Atholl area) during the winter months at dawn and dusk, please be alert and watch for deer on the road as they can cause serious damage to you and your vehicle.

Please stay well away from any deer calves you encounter whilst out walking, the mother is never too far away!